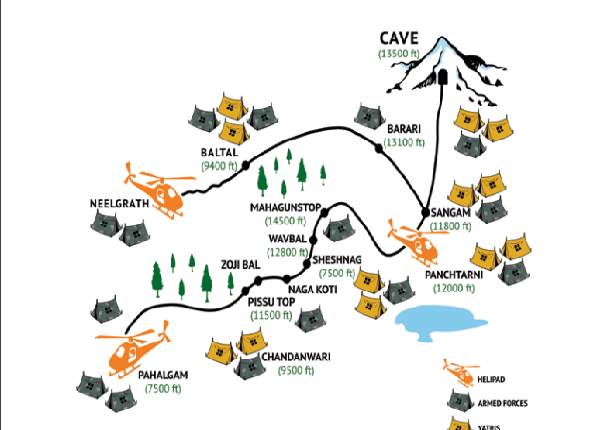 Let us Plan The Ideal Amarnath

Amarnath Yatra is conducted in Kashmir valley. The Amarnath cave is at an altitude of 12,800 feet. This yatra opens for a short period. Generally, Amarnath darshan starts in the month of June and July. And the closing of the yatra is in the month of August.

Amarnath yatra is yatra to Amarnath cave for darshan of Self made ice shiv linga. Amarnath yatra happens by two routes. Generally, These two routes are the Pahalgam route and Baltal Route. However, most pilgrims prefer trekking to Amarnath Cave. But Helicopter service is also available from Baltal and Pahalgam. Also, It carries a special place in Hindu mythology. It is the journey to the heavenly abode of Lord Shiva.

The pilgrimage to Amarnath Yatra 2023 is an arduous trek that lets you follow narrow and steep mountain paths. There are many hurdles along the way, to reach the place where the sacred ice Linga of Lord Shiva is located.

Every year, thousands of pilgrims undertake this tough journey to reach Amarnath with Advance booking of the Amarnath Yatra Package. Amarnath Cave is located at the end of Lidder valley at a distance of 141 km from Srinagar and at an approximate height of 3888 meters. Pilgrims take the Amarnath Yatra package with the belief that Lord Shiva appeared in the form of ice.

We believed that there are 12 Jyotirlingas around the country with special significance as explained in Hindu mythology. Though every Jyotirlinga had its special importance of origin and the great Lord Shiva resides in only some of them. Amarnath is the place that carries a distinctive and above-the-role position among all the Jyotirlingas. This place is famous for the story narration made by Lord Shiva to Parvati. This story is regarding the concept of creation. Also, The Amar Katha and immortality secrets.

Amarnath cave is the place wherein Lord Shiva had dictated the story of creation and immortality secrets to Maa Parvati. The story goes with the question raised by Mata Parvati to Lord Shiva as to why he wears the beads of heads (Mund Mala). Lord replied whenever you are born then I add on one more head in my beads. Then Mata Parvati insisted on telling the secret of the immortal state enjoyed by the Lord. The lord replies that all this happens with the reason of Amar Katha.

To Sum Up, God chooses Amarnath Cave to tell the secrets of immortality to Mata Parvati. On the execution of reaching the place, he left out all his personal belongings. such as he left his Bull Nandi at Pahalgam, his moon at Chandanwari snakes at the banks of Sheshnag, and his son Ganesha at the core of Mahagunas mountain. He has also discarded the five elements i.e. Earth, Sky, Fire, Water, and air behind. People believe that as a symbol of sacrifice. Also, both Lord Shiva and Mata Parvati had Tandav Dance.
Lord Shiva entered the holy cave with Mata Parvati and takes on his Samadhi on the deerskin and concentrate. He just wants to ensure that no other living creature can hear the immortal story. The creation of Rudra named Kalagni is done. And he also orders him to extend fire all around the cave for security reasons. By chance, an egg was left out in the cave from which a pair of pigeons had also heard the story of immortality. And they also become immortal.

Today also, people believe that it’s a good sign to see a pair of pigeons around the cave.
Pilgrims believed that the Amarnath Yatra 2023 is difficult to accomplish.
The Amarnath yatra packages will let you attain the blessings of Lord Shiva. The Yatra begins every year in the month of Shravan (July-August). We offer the best Package for Amarnath Yatra by Helicopter & by road and Starting from Various Location Such As Delhi, Mumbai, Hyderabad, Bangalore, Ahmedabad, Kolkata, and many more places.

What makes us different from other tour package companies.

With more than 10 years of expertise and in-depth knowledge of the chardham sector, our travel specialists can assist you in selecting the ideal itinerary for your needs.

During your trip, our travel specialists are just a phone call away to provide you with any kind of quick support so that your trip is more pleasurable and hassle-free.

exoticmiles , we can guarantee the best prices to all of our valued customers without the involvement of a third party. This guarantees the best rates and individualised care.

Looking to explore something

Let our expert helps you to make your own package


From Our Blog View All Blogs

Looking to explore something 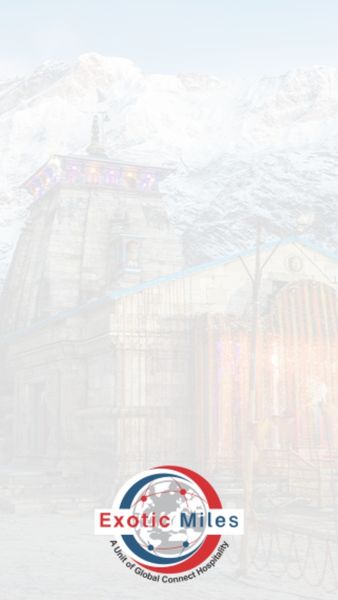 Call Us for details

Get The Best Amarnath Packages

Why Travel with us?